KILIMANJARO is the highest mountain in Africa and the tallest freestanding mountain known to man. It is a mountain where you can hike for more than 90 kilometers, gain 4 000 meters in altitude, traverse rain forest, moorland, alpine desert, snow fields and ice cliffs, all virtually on the equator! A truly unforgettable and fascinating adventure.

Kilimanjaro has intrigued modern man for the past century. There’s no denying that the human spirit thrives on exploring and conquering the unknown. Although it was spoken of in the second century, Mount Kilimanjaro was only “discovered” by the western world in 1848, when the German missionary Johannes Rebmann came within sight of the mountain, explored the area and traversed the lower slopes. He submitted his findings to the Royal Geographical Society, but his description of a snowcapped mountain in eastern equatorial Africa was doubted by these “experts”.

During the following years there where a number of unsuccessful attempts by various explorers to conquer the summit and it was only on the 6 October 1889 that Dr. Hans Meyer, with Ludwig Purtscheller an experienced alpine mountaineer, managed to reach the summit successfully. The expedition consisted of many porters, guides and advisors. It took the intrepid Meyer almost 6 weeks to reach the summit, 6 times as long as it takes the average climber today. At the centenary of this climb in 1989 one of their Tanzanian guides was still enjoying live at an age of 118 years!! 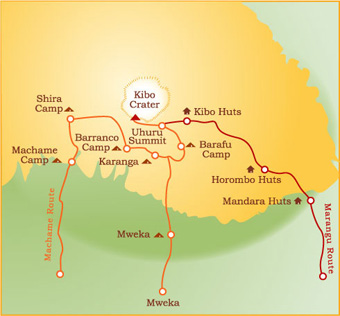 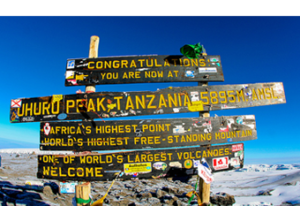 Kilimanjaro rises from plains at approximately 2000 meters, right up to 5 895 meters. An ancient volcano, it now lies dormant except for some tell tale signs of fumaroles in the ash pit. Two other peaks, namely Mawenzi and Shira, flank the main peak of Kibo. These peaks form spectacular photographic backdrops when viewed from various vantage points along the routes to the summit.

The different routes to the summit pass through five ecological zones, being the cultivated lower slopes, Montane forest, heath and moorland, alpine desert and the ice capped summit.

The lower slopes of the mountain are mainly used for agricultural purposes.

The climate here is ideal for the production of coffee, an industry that Tanzania is famous for. Further up, a rain forest belt encircles the mountain up to about 2 00 meters. As you proceed higher, you pass through the heath which changes into moorland, semi-desert at altitude, progressing into total desert and finally into an alpine region with permanent ice glaciers. The higher slopes are covered with scree, loose stones resembling gravel, making it more difficult to negotiate. The main glaciers edging their way down the slopes of Kibo are Heim, Rebmann, Decken, Arrow and some smaller ones. These glaciers form the permanent ice cap of the mountain, although they are, as a result of global warming, believed to receding each year.

Being only 3 degrees south of the equator, Kilimanjaro is influenced by the passage of the Inter-tropical Convergence Zone. There is a constant feeling of summer, and there are two rainy seasons to keep in mind. The highest rainfall occurs from March lasting until about the end of May. This is monsoon time. Slightly less rain falls during the short rainy period, which occurs from around October to November, but can extend into December. Apart from these factors, climbing Kilimanjaro remains fairly constant throughout the year.

The maximum rainfall occurs in the forest belt, where it can reach up to 2000 mm per year. At the summit, which can be, describe as a “high altitude desert”, the rainfall reaches less than 100 mm per year. Rain (and snow at higher altitudes) can however be encountered at any time of the year.

The average temperatures at the foot of the mountain is 25°-30° C and on the summit, it can range from minus 10° -20° C. At 3000m the day temperatures range from 5°-15° C, and at night frost is normally encountered. Clearly a large variation, making it more interesting to summit the mountain.

How difficult is the climb-can I do it

About 22,000 climbers set out every year to conquer the Kilimanjaro peak. Several well-marked hiking routes lead to the summit of the mountain. To use the word “climber” is not always correct. Although none of these hikers routes really requires mountaineering skills, hiking to the “roof of Africa” is physically and mentally demanding and should not be under estimated. As much as 40% of those who set out to climb Kilimanjaro turn back before they reach Uhuru peak.

Today, hikers make up the bulk of all those who conquer Kilimanjaro, and the mountain is in fact one of the highest peaks accessible to hikers in the world. Of course there are extremely severe climbs available, including some grade 3+ climbs, but those we leave to the professional alpine climbers and experienced mountaineers. The information on this website is primarily concerned with the hiking routes, which “the average hikers” can follow successfully.

With the adequate preparation any reasonably fit person above the age of 12 years can reach the summit successfully, in fact the oldest person to date to reach the summit was a Frenchman Valtee Daniel at an age of 87!!

Preparation both physically and mentally is the keywords for success– this web site contains valuable and comprehensive information obtained from 9 years of experience and through the feedback from more than 4300 clients. We believe it will positively contribute to your chances of successfully conquering Kilimanjaro.

The main tourist route and by far the most popular route and some claim the easiest route to Uhuru Peak. The 5-day option, which is available on this route, makes it the least expensive route on the mountain. A 6-day option with an extra day of acclimatisation is however also available. This is the only route, which provides comfortable sleeping huts, equipped with beds and mattresses at every campsite. Mineral water, soft drinks, beer and chocolates are also sold at every camp. All the camps on this route have radio contact with the Park Headquarters.

This is probably the most scenic and most beautiful route to the summit. The 6-day route is however physically more challenging than the Marangu route. The day walks are longer and steeper, however the summit night is one hour shorter. The scenic traverse of the Western Breach offers some stunning views! Only tented accommodation available, which can be less comfortable and will require a good sleeping bag and hiking mattress.

This route is one of the shorter but also one of the more difficult routes to reach Uhuru peak–but quiet spectacular. Umbwe is known for its caves. The first night you actually sleep at the Umbwe Cave Camp with two more caves that can be visited on route the following day. Also sometimes used as a descending route.

The Shira Plateau is one of the most scenic and most fascinating areas on Kilimanjaro. Depending on the weather conditions you can drive by 4 wheel drive vehicles, to within a 1/2 hours walk of Shira Hut (4000m). Even this drive is very spectacular indeed and offers some magnificent views of Mt Meru and the Great Rift Valley in general. Game is often sighted and the road features some striking vegetation changes ranging from forest, grassland, heath to moorland. The fast ascend by vehicle to about 4000m will require additional acclimatisation, after which it will be possible to ascend Uhuru Peak either via the Western Breach or via the Barafu hut.

This route can only be use as a descending route for all the western routes.

It is a remote, unspoiled and very beautiful route to the Roof of Africa. The forest around the Lemosho Glades is rich in big game animals such as elephant and buffalo, which may sometimes require a game ranger to accompany climbers on the first day. This route is however a long route which requires 7-days for a comfortable completion, which also makes it more expensive.

You can start this route from both the Tanzanian side of the border or from Rongai in Kenya, but all park fees and arrangements must be made at the Marangu gate. The route may only be used for ascend and the Marangu route must be used for descend. There are several big caves along the route, which are used by the porters to overnight for the first two nights.

An alternative final ascend route which can be taken from all of the western routes, sleeping at magnificent Arrow Glacier on your summit night. The western Breach poses a very difficult walk up steep scree with some rock scrambling occasionally required. Snow cover makes scree easier but an ice axe is then required. It is also possible to sleep an extra night inside the Kibo Crater!

No Technical climbs or adventure activities such as paragliding, cycling or skiing are aloud on Mt. Kilimanjaro.

There are several tented camps and luxury lodges available around the Mount Kilimanjaro.
If you have specific questions about Lodging at Kili, please email us from the Book Now section.